The most delicious recipes in all of Wonderland

I’ve always been a little leery of cooking chicken in the crockpot since it has a tendency to dry out.  I was pleasantly surprised with the whole chicken, and was able to make a delicious soup with the leftovers the next day.

Add mushrooms, tomatoes, red pepper to the crockpot.  Place the chicken in breast side down. Pour wine over chicken, salt and pepper to taste.  I went fairly heavy with the paprika since it really colors up the skin nicely, and gives the broth a rich flavor.  Cook on low for 8 hours.

When cooked, removed the chicken to a sheet pan…I didn’t even need to use a knife since the meat was literally falling off the bones.  Be sure to save all that broth for the next day’s meal !

Combine all ingredients in the crockpot, give it a stir.  I actually threw in the larger bones from the drums and thighs during cooking — I think it makes for a tastier soup.

Cook on low for 8 hours or high for 4.  Add heavy cream right before serving, and top each bowl with a bit of grated pepperjack cheese if desired.

This recipe passed the “kid test” by the way…we had 3 hungry teenage boys over helping move some heavy stuff out in the yard and they devoured it ! 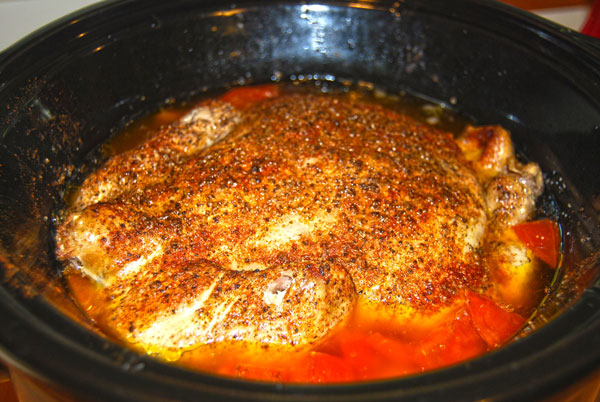 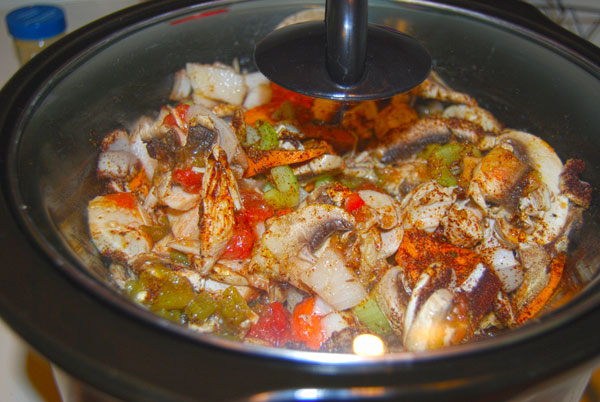 Chicken Broth is typically a “free-form” recipe and varies a little each time I make it.  This batch was made with remnants from our Christmas meal.

Homemade stock adds a huge amount of flavor to soups and stews – I personally find that canned “store bought” stock tastes like salt water. Obviously this is a money saver as well.

Chicken carcass/bones after cooking and devouring it

Throw all fruit, veggie, and chicken remnants into a pot, add about 10 cups of water, bring to boil, then simmer for a couple of hours.  Strain stock, store in containers in the freezer for future deliciousness in soups.

I purchased an EMEALS Groupon last week, 24 dollars for a one year subscription.  A mere two bucks a month – so exciting!

So, for the price of one Starbucks coffee a month, I get 28 dinner recipes, along with 28 sides to go with them.  Most importantly, I get the shopping list that even my better half can follow. The plan allows you to choose several different eating styles (low carb and paleo are both on the list, as well as several others).  You can choose the option for 1-2 people, or 3-6.  I went with the 3-6.

I journeyed to the grocery store, list in hand.  With the list categorized into Produce, Frozen, Meats, Canned/packaged, and Dairy, it was very quick and easy to zip through the store and purchase the necessary ingredients – a total plus for all you shopping haters like me. Total bill was $122.85, which is a bit higher than what I normally spend.  Probably because on this plan there is meat for dinner every night, and a few “pre-packaged” items that came in cans or jars that I wouldn’t normally use. 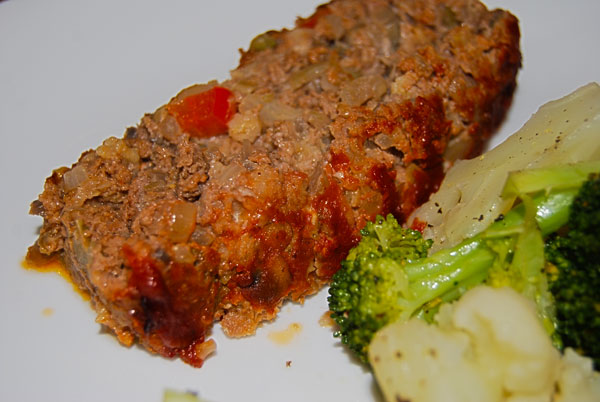 The soup was actually quite terrible…I had my suspicions as I was prepping it. Chicken breast is great, but not usually in the crockpot. I would have normally used drums and thighs (less expensive, more flavorful when slow cooking).  The other ingredients were tomato paste, beans, broth, roasted red bell peppers, garlic and spinach.  All in all, soup was:

– Not flavorful
– Didn’t have enough veggies
– Had to triple the broth to make sure we could feed 4 people (our three person family plus one adult guest).
– Recipe called for 10 ounces of baby spinach, and honestly there is NO possible way I could have gotten all of it in, even with triple the broth.
– Had to add 2 tsp. cumin and 2 tsp. chili powder to give it some kind of flavor other than just “broth”.
– Since it still was poor tasting I added 2 ounces cream cheese and 1/4 cup heavy cream.

Despite a huge attempt at doctoring the soup, it still didn’t taste great.  Since we don’t really eat pork I substituted parmesan covered garlic bread which was the meals only saving grace.

This meal was pretty good, but after my previous chicken soup fiasco I decided I was going to add some ingredients “up front”. You cant doctor meatloaf like soup!

Obviously the Grandma referred to in the recipe didn’t grow up in the same time period as my Nana….Nana taught us that to stretch your meat and feed more people, you need to add veggies. This recipe called for ground meat, oatmeal, sloppy joe sauce, egg whites, 1/4 cup bell pepper, 1/4 cup onion and 1 clove garlic. Lots of meat, only 1/2 cup veggies.

I added 2 stalks celery, used two whole onions, 1/2 lb mushrooms, 1 large red bell pepper, 5 cloves garlic.  I also added the entire egg, rather than just the whites. By adding the sauteed veggies, I snuck in some additional nutrition, AND was able to eek out two loaf pans of the meatloaf, thus stretching my prep time, dollar, and setting myself up for an easy after-work meal next week.

I have to admit that the sloppy joe sauce was quite inventive.  Have never used it before…it had a sort of ketchup-ish flavor which was OK.  However, I think it would have been less expensive to use ketchup with a bit of dijon mustard to get that same taste.

Mashed cauliflower is not one of my favorite dishes, so I went with just steaming some cauliflower and broccoli instead and topping with a little butter and fresh garlic.

Overall this meal was good, but due to the modifications, I can’t truly say if the original recipe would have turned out tasty or not.  The family loved it BTW.

I went ahead and prepared exactly per the recipe which included mayo, Greek yogurt, jalapeno, ginger, coriander, cilantro, cumin, and green onions.  I was a little more excited about this meal since there were a lot of ingredients that are all very flavorful, and that I don’t use too often.  The chicken salad came together quickly and was very easy to prep.

Acorn squash is not something I prepare too often as a side.  It’s high in carbs, and a little too sweet for my taste, but I went ahead and followed the recipe to the letter.  I was delighted that it turned out awesome.  The Parmesan and olive oil toned down the sweetness of the squash.

The chicken salad, like the other recipes was not bad, not stellar, just OK.  The family did not like it at all though.  I think ginger/cilantro flavor put them off.

Yet again….for a low carb plan there are just not enough veggies in this dish.  Recipe called for 2 pounds top round steak (that’s A LOT of meat for a stir fry), frozen broccoli florets, garlic, sesame oil, and bottled Szechuan stir fry sauce.

I added 2 stalks celery, 2 carrots, 1 onion, raw spinach, used FRESH cauliflower and broccoli, and 8 ounces of mushrooms.  The flavor was great, mainly due to the prepared Szechuan sauce.  I think I could have omitted the sesame oil (which was a little spendy), since the bottled sauce already had a strong sesame flavor.  I went ahead and cooked some rice to go with this for the kiddo and a dinner guest.  Everyone loved this dish.

Overall this meal was above average simply because you can’t go wrong with bottled Szechuan sauce, but again, I think my additions basically invalidate my ability to truly rate this recipe. 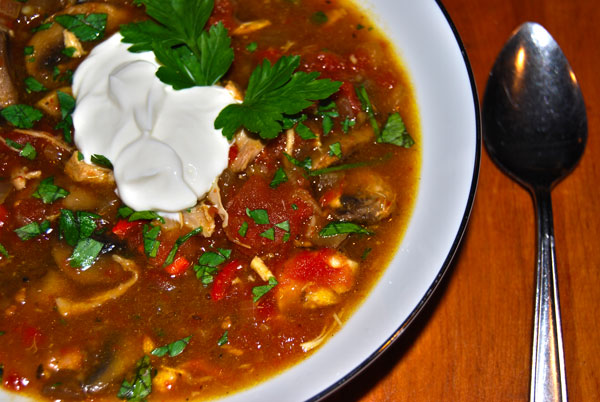 I used a product called S&B Golden curry sauce mix in this soup.  It comes sealed and is firm and somewhat pliable so can be sliced.  It has some thickening qualities, and gave a nice flavor to the soup.

Dice the entire package (5 servings) of curry mix just to break it up, and add to crockpot.  Stir all ingredients.

Cook on high for 4 hours or low for 8 stirring once or twice during cooking.  Garnish with parsley and a dollop of sour cream.  Makes 16 one cup servings.